Our (not-so) monthly look at the recent and upcoming non-metal albums that have been tickling our ears on a regular basis.

Xavier Serrano – Bell Chimes of Yesteryear
After a stint fronting indie-folk outfit, Kindred Queer, and a run of three solo EPs, New Haven, Connecticut’s Xavier Serrano has already established himself as a musical force to be reckoned with. His is a voice and a sound that often breathes fresh air into the singer/songwriter motif. With his debut full-length album, Bell Chimes of Yesteryear, Serrano’s songwriting has leapt to hurricane force. Serrano makes music that is often times simultaneously powerful and understated. A certain phrasing, a certain riff, a certain arrangement within an individual song has the ability to stop you dead in your tracks, and those moments of pure sonic bliss happen quite often on this record. The album cover shows a snowy, downtown New Haven, and you can’t help but stare at each window wondering what stories are unfolding inside them as Serrano weaves his own tales – the human condition strummed and sung to perfection. There are also those mystical elements of the beyond in both. Beyond the bustle of downtown lay a horizon of hills and sky that stretch on and on, and Serrano’s music conveys those same feelings. There’s something mystical churning and awakening under the layers of acoustic guitars, chamber folk accompaniments, and hushed vocals. There’s something alive within this album that clutches you like a long-lost friend who you never want to let go of ever again. In the roughly two weeks since this album’s release I’ve personally experienced great sorrow, great joy, watched the sun rise over a long highway, and sat in the cold night under a full moon. This album was, or would have been, the perfect emotive soundtrack each time.
https://xavierserrano.bandcamp.com/album/bell-chimes-of-yesteryear 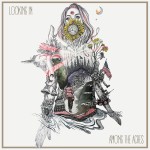 Among The Acres – Looking In
The musical world is filled with great stories of serendipity ending in fantastic collaborations. Hartford’s Among The Acres originally grew out of two songwriters – Michael Day and Sean Lemkey – trying to find their own solo sound and winding up in the same studio. What’s grown since the universe put these two talents in touch is something equally impressive and beautiful. Among The Acres has been teasing audiences all across New England with the promise of a debut album for well over a year now. Their live sets were the perfect showcase for their uncanny harmonies and Americana-drenched songbook, but not being able to take some of that magic home with you afterwards is always a bit deflating. With Looking In, Among The Acres has finally gifted fans with the perfect compilation of their collective talents. Mixing in a wide array of Americana-based styles, Among The Acres draw from a long list of influences. Chamber folk, indie folk, blues, alt-country, and roots rock all make appearances on this record, masterfully woven together to create a sonic tapestry that is both engaging and soothing. There’s a folksy, down-home sort of vibe that is pervasive throughout the album, a sort of sonic connection to the natural world around us and the mystery that it holds. Day and Lemkey trade off on lead vocals throughout the record and nothing is lost in the transitions while they seamlessly float in and out of various sonic waters. Meanwhile, the rhythm section of Greg Ganci on bass and Erik Lindblad orn drums/percussion offers a groove-tinged backbone that plays well to some of the album’s more indie/roots rock elements. Altogether though this is less an album of parts and pieces as it is a musical body functioning at an extremely high level, with levels of musicianship and songwriting that at times fly right off the charts. Fans of everything from Fleet Foxes and Bon Iver to Ben Harper and Wilco will find a lot that appeals to them with this album.
https://www.amongtheacres.com/

Ashley Hamel – WZRD
A concept album that revolves around the wizarding world of Harry Potter? That sounds like either a children’s album, or some sort of comedy record, neither of which I would ever touch in a million years (even despite my love of the Harry Potter books). But Connecticut songwriter Ashley Hamel is not writing music for children, nor is she looking to necessarily make you laugh. No, anyone who has been privileged enough to catch one of Hamel’s high-energy live performances can tell you that she’s a top-notch songwriter, as well as a master entertainer. Hamel can’t help, nor should she be faulted for, her love for that lightening-scarred fictional wizard and J.K. Rowling’s sordid cast of characters. Lyrical content aside, WZRD is the perfect showcase for Hamel’s talents. Her blend of indie folk and pop rock is as catchy as it is memorable. She’s able to take sugary pop hooks and coat them in enough indie aesthetics that even the most hardened music fan will find themselves tapping along to at some point. Hamel’s voice is a highlight on this album as well. She lets it soar all over this record carrying notes to impressive delivery. As the record progresses so does the songwriting. Tracks like “Look At Me” and “Bring Them Home” are folksy home runs where Hamel truly flexes her songwriting muscle. You don’t have to be a Harry Potter fan to love this record, nor should you allow the lyrical concept to scare you off if you aren’t. If you like songwriters who are confident in their talents and not afraid to bare a little bit of their soul for you then Hamel should be on your playlist.
https://ashleyhamel.bandcamp.com/