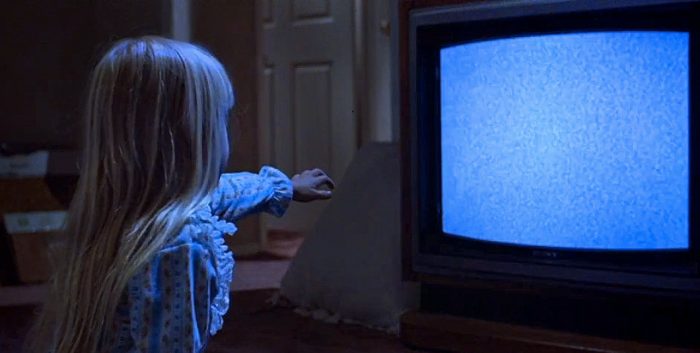 Horror Movie Redux is a new column where the older kids and I revisit some of the horror movies from my youth. Next up, the 1982 classic, Poltergeist.

One of the great supernatural thrillers of all-time, Poltergeist, directed by Tobe Hooper (who also directed The Texas Chainsaw Massacre) stars Craig T. Nelson and JoBeth Williams as the parents of three children, all living a somewhat bucolic, Southern Californian existence until vengeful spirits come calling. Their world quickly starts to unravel in a haze of ghostly happenings and spiritual malevolence. It was one of the first true horror movies I can remember watching as a kid myself, and it has always held a special place in my blackened heart.

Did It Hold Up Over Time?
Mostly yes, but sometimes no. Yes, some of the most iconic scenes in the film remain as such. The clown scene, the unfinished pool scene, and all of the scenes dealing with their youngest child’s abduction and house possession are still fantastic. There’s an element of both suspense and a sort of claustrophobia in the storytelling that stands out under Hooper’s direction. Zelda Rubinstein as Tangina delivering the line, “This house is clean.” stills stands as one of the greatest horror movie quotes ever uttered. But with all of that said there were still pieces of this film, that after taking well over a decade between viewings, stood out as either dated or simply poor choices from the get-go. The end scene was somewhat silly and anti-climactic after the family had endured such a well-written barrage of terror. The film was written and produced by Steven Spielberg, and that is more than evident in some of the pseudo-comedic elements that were kept in the final script. Spielberg, after all, wrote movies for families. We were never going to get something that was pure horror from start to finish. But were remote controls for your television that interesting in 1982 that we needed an entire scene where Nelson and his neighbor battle with dueling remotes that change each other’s sets. (Oh, the days of tract housing developments and simplistic technology.) And whether it was Hooper’s or Spielberg’s decision to utilize a soundtrack that often times worked against what was happening on screen remains to be seen. Still, most of the criticisms I have are minor in relation to the big picture. Poltergeist remains a must-see film, especially for movie fans who are just dipping their toes in the horror pool.

Is It Child Appropriate?
I always temper this question with the cop-out response, it depends on the child. For the most part this film is fairly safe, especially for older kids. There is no gore to speak of (although whatever that junk is that Carol Anne and her mother are covered in at one point in the film almost made me throw up in my mouth when I was a kid). There are some fairly intense scenes of supernatural terror involving the children of the family, and if your kids are already afraid of clowns, ghosts, or thunderstorms this movie isn’t going to help them assuage those fears. There’s some mild cursing (typical of ’80s films, frankly) and the parents do smoke pot in one scene. There’s also a scene I had forgotten about over time where a construction worker in their yard is leering at and making a rude comment to the family’s teenage daughter. That was gross then and it certainly is now. Common Sense Media gives this movie a 13+ rating and honestly I can’t argue with that. Depending on how open your family is in discussing things like smoking pot or the afterlife, this film is worth seeing and shouldn’t cause too many nightmares.

Overall Rating
The 15 and 12 year old had watched at least a dozen other horror(ish) movies with me before I slipped this one into the rotation. This may have been the first horror movie the three of us watched that was universally loved. While there were some scenes they thought were somewhat dated or ridiculous. They both agreed that the story and its overall execution were more than solid. While I’ve outlined some of my own gripes above, I have no problem going on record as saying this is still one of the top 25 or so greatest horror movies made in my lifetime. Solid 8 out of 10 from all three of us.
Overall Family Rating: 8