When reminded it’s been a solid four years since they last gifted us with any new music, Goodnight Blue Moon vocalist/guitarist, Erik Elligers responds with a sigh of relief that could be heard through e-mail, “Yeah…four years. We needed time for this album.”

New Haven’s Goodnight Blue Moon cemented themselves as heavy hitters in the CT music scene with their 2012 debut album, How Long. It stands as a record that seemingly blew the doors off a statewide scene and opened an array of doors for the band. Accolades and year-end lists were followed by festival performances all over New England and a shiny trophy at the 2nd Annual CT Music Awards. They parlayed that success well and rode a massive wave of momentum to their second release, 2014’s A Girl I Never Met EP. The accolades, year-end lists, and festival performances continued to pour in. While Goodnight Blue Moon never went away, a revolving door of bass players, life changes, and personal challenges slowed their roll a bit.

“After A Girl I Never Met came out we played a bunch and then took some time off to consider writing again,” said Elligers. “In that time, Vicki (Wepler, violin/vocals), Nick (D’Errico, drums) and our bass player at the time had babies, (Mat) Crowley (mandolin, guitar, vocals) got married, life threw us a couple of punches and I think we can all agree that 2016 will go down as one of the worst years in history. But, with all of that said, these songs wouldn’t exist without all of that.”

On top of babies, weddings and bass players, the process of putting together what has become new album, Dawning Dream, wasn’t always a smooth one. “We actually started recording some of these tunes back in 2015, but scrapped the project because it just wasn’t feeling right,” said Elligers. “By 2016, however, we had a solid and reliable bassist and we finally were able to build some momentum instead of re-teaching all the old songs to new members. With a fresh perspective on some of the early songs and new inspiration to move forward with some others, things really took shape and we were finally ready to get back into it.”

Mix in two new permanent members – Sean Rubin on bass/vocals and Dan Liparini on lap steel and guitar – alongside Elligers, Crowley, D’Errico, Wepler, and Nancy Matlack (cello, banjo, keyboards) – with the aforementioned fresh perspective, and get back into they have. When Goodnight Blue Moon dropped the album’s first single at the end of February – the super infectious, toe-tapper “Undertow” – it not only stood as a harbinger of good musical things to come, but immediately put them back on a lot of local and regional radars. That single is indicative of many qualities that have made people fall in love with Goodnight Blue Moon in the first place. It’s a catchy, sing-a-long type of song rooted simultaneously in Americana and pop aesthetics. Goodnight Blue Moon has always been a bit of a pop/indie band hiding in traditional music clothing. Combining ‘60s-styled harmonies and lush instrumentation with a down-home, indie folk twist, Goodnight Blue Moon has always been able to appeal to a wide audience, often introducing some twang to those who don’t normally partake.

Dawning Dream seems like both a natural extension of previous releases, but also an album filled with experimentation, exponential growth, and refreshing self-awareness. “While it is definitely a progression for us, I don’t feel like we’ve moved away from our Americana sound,” added Elligers. “If anything I think we’ve really embraced Americana and all that encompasses more than ever before. We could say that we’ve moved away from the bluegrass and some of the traditional influences that shaped a lot of our earlier writing, but this album speaks to some of the country, roots rock and folk acts that also inspire us. Our sound has always been about featuring vocal harmonies and rich orchestrations, that hasn’t changed with Dawning Dream.”

While tracks like “Something Beautiful”, “Sunset Over State”, and the first single still pull greatly from the Americana pantheon, flowing like lazy streams through various sonic backwoods, there are still strong indie and pop forces at play. For Elligers, in the end, it’s all cut from the same cloth. “The beauty of Americana music is that it lives in all of these spaces and really allows for a band like us with an eclectic sound to have a genre to call home and a language to describe ourselves.”

Too often bands try to live in a bunch of spaces and the end result is a mish-mash of influences that don’t work on paper, on record, or on stage. Goodnight Blue Moon is an exception to that ever-growing rule. They started off by building a musical house that stood on several different foundations, continued to build, and with Dawning Dream have virtually perfected it. With a calendar filled with touring and festival appearances, including the CT Folk Festival and the Glastonbury Apple Harvest Festival, the future looks as bright as ever. “This band loves making music together,” said Elligers “and as long as it’s fun for everyone, we’ll keep pushing forward.”

Dawning Dream is out now and can be purchased/experienced at the Goodnight Blue Moon Bandcamp page. 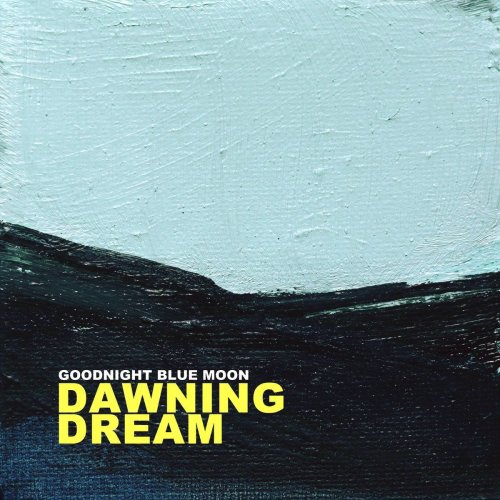