Part three of our year-end metal list brings us into to the top 20. If you want to hear songs from these albums you can check out the first part of our two-part year-end Metal Dad Radio Show here: Cygnus Radio

20. Daeva – Through Sheer Will and Black Magic
Having put out only one EP prior to this year, and that having come all the way back in 2017, Philadelphia’s Daeva was nowhere on my radar when this year started. Thankfully the geniuses at 20 Buck Spin know a hell of a lot more than I do because they released this band’s debut full length in October and I haven’t been able to get enough of it since. Playing a downright violent style of blackened thrash Daeva give some serious first wave black metal vibes while creating an album that absolutely torments the senses in the best way possible. Fans of the earliest outputs from acts like Bathory, Slayer, Kreator, and Sodom need to get on this album post haste.
https://open.spotify.com/album/39xLywq8gaDHfr8YQ9XUS3 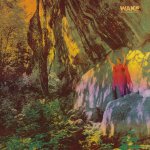 19. Wake – Thought Form Descent
One band I’ve been intrigued by for several releases now, dating as far back as at least 2016, is Calgary’s Wake. Blending elements of sludge, post metal, and death metal with a blackened edge this band has created some of the most underrated material of the last few years, and their newest album Thought Form Descent may be their most cacophonous (and best) release to date. The more I listen to this album the more it makes me what to run through brick walls and rip trees out of the earth with my bare hands. It’s just a powerful, crushing release from start to finish.
https://wakegrind.bandcamp.com/album/thought-form-descent 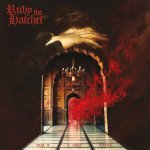 18. Ruby The Hatchet – Fear Is A Cruel Master
You know what else is a cruel master? Impatience. Like the impatience of having to wait five years for one of your all-time favorite stoner rock bands to finally release a new full length studio album. I fell hard for the stoner rock scene in the early ’90s when bands like Kyuss and Fu Manchu were ruling the world. I sucked up every fuzz-soaked album I could find for at least a decade before I thought the scene had started to just imitate itself. But this band almost single-handedly brought me back to the stoner fold and their newest album is at least in the discussion for not only their personal best, but for one of the best stoner rock albums of the last 8-10 years. Heavy, catchy, and filled with phenomenal individual performances.
https://thehatchet.bandcamp.com/album/fear-is-a-cruel-master

17. Reeking Aura – Blood and Bonemeal
If you’ve ever listened to The Metal Dad Radio Show then you know I like my death metal the best when it’s sludgy, grimy, doom-laden, and brutal as hell. The new long player from New Jersey’s Reeking Aura checks all those boxes and then some. Each time I’ve listened to this album since its July release I’ve come away more and more impressed with its ability to downright captivate, and there are different nuances amongst the sheer brutality that keep popping up making it an interesting listen every single time. Simply put, this is modern death metal done right.
https://reekingaura.bandcamp.com/album/blood-and-bonemeal

16. Devil Master – Ecstasies of Never Ending Night
I absolutely love when a band can dig deep into several varying genres and successfully meld them into a unique sonic experience. One band that’s been absolutely knocking it out of the park over the last several years is Philadelphia’s Devil Master. You want first wave black metal? Punk rock? A little thrash? A little goth rock? How about some crust/d-beat? How about if you took all of those things, threw them into a cauldron with some black candles, robes, and a smoke machine and let it simmer for a fortnight? That would be a close approximation to the vibes new album Ecstasies of Never Ending Night is giving up, yet even that can’t truly nail what’s happening here. Must be heard to be truly experienced.
https://devilmaster.bandcamp.com/album/ecstasies-of-never-ending-night

15. Afghan Haze – Hallucinations of a Heretic
One of my absolute favorite things is when a band from my backyard here in Connecticut puts out an album that absolutely knocks me on my ass. This year that album came from sludge/stoner/doom act Afghan Haze. I’ve been singing this band’s praises since their debut dropped at the tail end of 2020, but even I couldn’t expect just how great the follow up album would be. Taking the heaviness of sludge, the psychedelics of stoner rock, and the unrelenting nature of doom Afghan Haze have gifted us an album that can both pummel and fascinate, all within the confines of each individual track.
https://afghanhaze.bandcamp.com/

14. Mares of Thrace – The Exile
Sometimes an act will go so long between albums that I just give up hope of ever hearing another record. Unfortunately dear reader this was my experience with Canada’s Mares of Thrace. After two brilliant records at the beginning of the 2010s life got in the way of living and Mares of Thrace went silent. The more time dragged on the more convinced I was that we weren’t going to get another record, yet at the beginning of this year I started to see trickles of info online about new material being readied for release and this instantly became one of my most anticipated albums of the year. Needless to say I wasn’t disappointed. The album cover of a small vessel fighting against raging waters to stay afloat is an apt visual for the music held within. Angular riffs and a throbbing rhythm section smash around creating a wall of noisy, sludgy post metal. It often times feels as violent and dangerous as those raging waters on the cover, and I’m in love with this album because of it.
https://maresofthrace.bandcamp.com/

13. Skumstrike – Deadly Intrusions
I didn’t write a ton of album reviews this year, but I did review this one. Here’s some of what I wrote back in July: “Mixing blackened thrash with a distinct crust/d-beat aesthetic, Deadly Intrusions is an album that takes the most vicious elements of each and brews them into a cacophonous explosion of metal fury. This album is an unrelenting gem that cuts in all the right places as it moves through its paces one blasting track at a time. Unholy vocals, riff wizardry, and a battery straight from the bowels of hell combine for a rollicking, hell-raising experience of the highest order.”
https://skumstrike.bandcamp.com/album/deadly-intrusions

12. Lament Cityscape – A Darker Discharge
The minute I heard the new Lament Cityscape album I was pretty positive it was going to wind up somewhere on this list. Here’s some of what I wrote about this record back in July: “The newest album from the Wyoming-based band is one of the few whose title actually matches what is held within. This album truly is a darker discharge than previous efforts, both in heaviness and atmospherics. It’s the type of album that will reel in both Godflesh and Jesu fanatics as it waxes and wanes between pummeling industrialized noise and somber ethereal passages. Whether attempting to crush you or lull you into a dreamlike state, this album is a fascinating trip through some of the darker recesses of the heavy music pantheon.”
https://lamentcityscapelfr.bandcamp.com/ 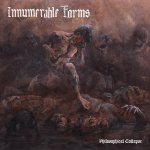 11. Innumerable Forms – Philosophical Collapse
The album bio that appears on the Innumerable Forms Bandcamp page specifically references Finnish death metal and early ’90s UK doom, with emphasis on Paradise Lost. Honestly, I couldn’t come up with a better assessment of this album no matter how hard I tried. Waxing and waning from the sheer hostility of death metal to the bombast and emotive fervor of doom metal, Boston’s Innumerable Forms have created and album that could literally drown you in misery if you let it. Highly recommended for fans of the aforementioned scenes/genres.
https://innumerableforms.bandcamp.com/album/philosophical-collapse