Bethlehem – Bethlehem
In 1996, Germany’s Bethlehem released their Dictius Te Necare album. It was then, and still is one of the greatest black metal album ever released. (Or “dark metal”, or “suicidal black metal” or however you want to label it.) While this band has spent the last 20 years putting out some quality material, you could make the argument that the true successor to that landmark release has finally been gifted to us. Bethlehem have always been a band that takes the darkest reaches of the human condition and makes them incarnate through doom-infused, blackened metal (as well as some interesting left-hand turns). So why is this album the true successor to that ’96 classic? The music on this album is the personification of abject human suffering, a mad vision gone awry. It’s the sonic equivalent to a suicide hotline gone unanswered. It’s a wholly memorable experience that can leave those not fully prepared ineffably scarred.
https://www.youtube.com/watch?v=dRe5BtzBi3Y

Worm Ouroboros – What Graceless Dawn
This is an album that I actually contemplated including on the non-metal version of this list as vast portions convey a shroud of darkness and misery without actually pummeling you with distortion. While recent albums from acts like Darkher ran through my mind, it’s actually bands like Ides of Gemini that Worm Ouroboros more closely resemble. Not to mention that when they do get heavy, they bring it and bring it hard with waves of oppressive, doom-inspired melancholy. But that juxtaposition of melodic grace with shadowy despondency is what makes What Graceless Dawn such an intriguing listen. It’s an album that can go from hopeless funeral dirge to something altogether elegant and back again within the context of an individual track as gorgeous female vocals play so eloquently with various elements of doom and post-metal. Even in their most stunning moments though Worm Ouroboros are still as sombre as a steady rain in an old cemetery. Like every carefully selected note, every stone has a story to tell in between the raindrops.
https://profoundlorerecords.bandcamp.com/album/what-graceless-dawn 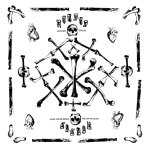 Gnaw Their Tongues – Hymns For the Broken, Swollen And Silent
It’s quite possible that no other act in the world does a better job of conveying pure madness, pure evil, and pure sonic devilment the way Dutch experimental/black/industrial metal act, Gnaw Their Tongues does. Everything this one-man act has produced has been downright nightmare-inducing, and newest album, Hymns For The Broken, Swollen and Silent, is no exception. The eight tracks held within are visions – very bleak and terrifying visions – of a world crumbling under the weight of collective despondency. There is no hope here. There is no love. There is only the burning stench of a world left to rot while the vultures pick the last few pieces from the bones. I’ve seen a lot of talk online about people creating their own “soundtrack for the Trump apocalypse.” It’s already been created. Get your headphones on and watch the world burn.
http://gnawtheirtongues.bandcamp.com/album/hymns-for-the-broken-swollen-and-silent