Skáphe – Skáphe2
Back in February, Philadelphia’s Skáphe released their second album, with the CD version coming to us from ever interesting I, Voidhanger Records. Upon first listen this was an album I truly had a hard time trying to compartmentalize. It’s an album that is as confounding as it is intriguing, and that’s meant as the highest compliment possible. It’s a wholly esoteric journey through a world of black metal that is as atmospheric as it is uncontrollable. Layers upon layers of sonic dissonance just wash over you until you are completely engulfed in this downward spiral of a journey into an unadulterated sonic abyss. A must listen for fans of acts that tend to just not care about humanity in general.
https://i-voidhangerrecords.bandcamp.com/album/sk-phe 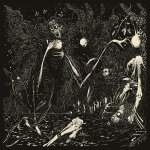 The Wakedead Gathering – Fuscus: Strings of the Black Lyre
Another album released back in February that surely opened up some portal directly to hell came from Columbus, OH outfit, The Wakedead Gathering. Mixing in all the best elements of death and black metal with some thrash metal like guitar work and old school grit, The Wakedead Gathering play a style of music that fluctuates back and forth across genres lines until they are blurred beyond recognition. It’s as completely heavy and utterly brutal as the nastiest death metal around yet has enough melodic elements and harrowing ambience to remain wholly interesting after multiple listens. While this band does just fine in pummeling the living shit out of any faces close enough to their collective punch, they are also proficient in the metal theatrics that exist across the entire landscape of the genre. It’s an exceptional release whose twists and turns become more and more profound as you move through the album.
https://thewakedeadgathering.bandcamp.com/album/fuscus-strings-of-the-black-lyre

Novembre – Ursa
Italy’s long-running death-doom outfit, Novembre, return with another slab of somber jams. Steeped in the ethereal embrace of their UK brethren, Novembre have been offering up atmospheric and funereal albums sure to please anyone with even a little bit of Gothic sensibilities coursing through their veins, and newest album Ursa is no different. Mixing in soothing clean vocals with deathly growls, over top of graceful compositions, this album has an almost cinematic, post-metal quality to it. Fans of acts as varied as early Anathema, Katatonia, and Amenra should definitely give this album a spin from start to finish.
http://www.novembre.co.uk/